Stop and smell the rainforest before you fly off.

The Kuala Lumpur International Airport (KLIA) in Sepang is the only airport in the world that features a rainforest within its premises. Beautiful and unique as it is, all passengers at the airport can do is look at it from the outside of the glass enclosure. What’s more, the rainforest centrepiece is actually a hindrance and an obstacle to the commercial aspect of the airport.

But all that is about to change. Four years ago, a journalist from the BBC visited the airport and was intrigued by the sight of a rainforest inside the building. He then asked to be allowed to enter the rainforest, but was denied entry.

Umar Bustamam, CEO of Eraman Malaysia, remembered: "At the time, I was in charge of corporate services. I told him he couldn’t go inside because it was closed to the public. But he insisted that he wanted to see the inside because he thought it was beautiful.

"We managed to get him inside by entering from the basement. Once he was in there, he was really amazed. He told us: ‘You have such a beautiful forest inside the airport which no other airport in the world has. Why don’t you open it up?’ I thought he was right," said Umar. 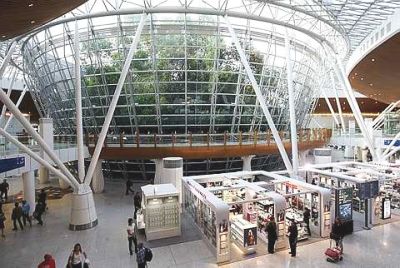 Unique landscape: The rainforest in the Kuala Lumpur International Airport is a one-of-a-kind feature, and passengers at KLIA will soon have the chance to take a walk through the glass enclosure and experience the
forest up close.

So, passengers will soon be able to walk through the rainforest along a wooden walkway and come out of the glass enclosure on the other side. This feature has more advantages than is apparent.

The way the KLIA is designed divides the satellite building (where the rainforest is located, and connected to the main building by aerotrain) into four zones – north, south, east and west. Once out of the aerotrain, passengers would normally look at the signages to see where their departure gates are, and head straight for them. With the rainforest glass enclosure in the centre of the building, it would mean that passengers on any one side of it would not see what was on the other side. From a business point of view, this is disadvantageous as passengers would miss out on the shopping opportunities that are not visible to them.

"We had to find ways to entice people to go to the other shops," Umar explained. "We did that in two ways. We provided an opening through the forest, which is one-way so they would have to come out on the other side and see the shops there. Next, we constructed a viewing gallery on the mezzanine floor. Now, people can walk around the forest and see everything, including the shops. That also creates visibility."

The mezzanine viewing gallery, which is already completed, provides a top view of the forest as well as clear views of the shops in all the zones. All these changes were done as part of what is called a retail optimisation programme. Eraman, the biggest duty-free operator in the country and wholly owned subsidiary of Malaysia Airports Berhad, has seven outlets in the satellite building.

"If you’ve been to the satellite building, before this, it used to be gloomy and not interesting at all," said Umar. "So, we tried to change it to make it more vibrant, and the ambience is more interesting for people to do their shopping. There is more variety now."

Also, under the programme, all food and beverage outlets are now on the mezzanine floor, thereby creating more retail space on the ground floor. However, three small cafes remain on the ground floor, to cater to those who want a short break.

"The changes are done by the airport, but since Eraman is part of Malaysia Airports, we gave our input," said Umar. "During the design stage, we came up with the ideas for the changes."

Umar revealed that they had to work around existing designs to optimise and maximise the usage of space.

"From a commercial point of view, that forest shouldn’t be there, because that is the most important space for commerce," Umar explained. "But we cannot just remove the forest, because it is also a very good feature of our country. It is an iconic feature of KLIA; other airports don’t have such a thing. So we used it to attract people to walk through, to get to the other side."

He said other airports are designed based on commercial needs and requirements. In KLIA’s case, during its design stage, there was less emphasis on the commercial aspects.

Broad spectrum: Umar Bustamam, CEO of Eraman Malaysia, on the brand new viewing gallery that offers a view from the top of the rainforest and also an all-round view of all the zones in the satellite building.

"So we had to carry out the retail optimisation plan and make the best out of it within the constraints," said Umar. "We cannot change the design of the building."

Umar said consultants who had been involved in many airport projects around the world were engaged. They carried out comparative studies and made recommendations. Areas of highest footfalls were identified, and more shops were placed there. The area after immigration and the first security check, and before the aerotrain station – known as the "contact pier" – has been livened up with colourful shops, among them a children’s toy and candy store with fanciful decorations.

"We wanted to have the same kind of atmosphere (as other airports)," said Umar. "We will gradually bringing in new brands and more variety to the airport. That’s why we needed to create more space. We are still working towards getting more top brands from around the world to the satellite building. We have already introduced the Godiva brand of boutique chocolates. We also have Harrods, which not many other airports have."

Umar said prices at KLIA’s shops are regionally competitive, even with neighbouring airports such as Bangkok and Changi, Singapore. Most people are not aware that the prices at KLIA are even lower than what is available in downtown KL.

"We have started a campaign to create awareness about our competitive prices," said Umar. "People are also not aware that there are products available in the airport which are not available downtown."

"We are definitely not going to repeat the same mistake we made for KLIA," said Umar of KLIA 2.

"We will design with emphasis on commercial needs. KLIA’s initial focus was on functionality and high technology. But, so far no one has complained about our architecture. They like it very much. Even (Singapore’s Minister Mentor) Lee Kuan Yew praised our airport," he concluded.

(Visited 423 times, 1 visits today)
This website is designed and maintained to search, gather, analyze, organize, categorize, and publish the widely available information related to LCCT, available both online and offline, for the sharing and benefit of visitors who will be using the Malaysia's LCCT (Low Cost Carrier Terminal) facilities to visit Malaysia. Read more about us. FYI: www.lcct.com.my is not affiliated, associated, not in any business relationship with Malaysia Airports Holdings Berhad (MAHB), the company in charge of operating the Malaysia's LCCT (Low-cost Carrier Terminal). Also, this website is NOT subsidized, funded, sponsored, endorsed, officially approved by MAHB or any airlines, food, telco, transport and many other companies mentioned. The privacy of our visitors to www.lcct.com.my is important to us. Please review our privacy policy.