COMPARED with other airports like Singapore's Changi and the Manila Inter-national Airport, parking at the Low-Cost Carrier Terminal (LCCT) in Sepang is considered high.

Frequent travellers claim that they have to fork out RM36 per day and RM40 if one uses the Touch & Go card.

David Tan from Puchong, in his e-mail said, for 24-hour parking, one only has to pay S$17.66 (about RM42) for a covered parking bay next to the Changi airport, 250 Baht a day (RM25) at the Suvarnabhumi airport in Bangkok and 50 pesos per day (RM3.80) at the Manila international airport.

"We can go on giving examples such as the Clark airport in the Philippines and the Jakarta airport and it will still show that parking charges at the LCCT are exorbitant," he said. 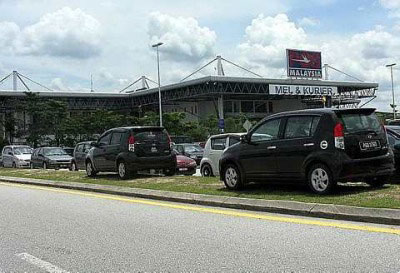 Too expensive: Motorists parking their vehicles on road dividers at the LCCT in Sepang to avoid paying for using the designated bays at the car park.

In the case of Changi airport, the charges are for a covered car park next to the airport while Stansted Airport in London, the £8.70 (RM46) charge includes a complimentary shuttle.

"We are charging very high when the car park is not covered although it is close to the airport," said C.W Tang.

Tang, who had just come back from an overseas trip, said he had to pay RM108 for parking at the LCCT for three days.

"The airport authorities should bring down the cost to encourage more people to use the facilities," he added.

Tang said parking rates at the LCCT used to be RM1 for the first two hours and RM2 for every subsequent hour. This, he said, is not cheap as compared with other airports.

There are 1,350 open-air parking bays at the LCCT now.

Since January 2007, the charges were RM2 for the first hour or part thereof with a motorist paying a maximum of RM4 for two hours.

However, from the third hour onwards, a motorist would have to pay RM2.50 and a cumulative sum of RM36.50 until the 16th hour.

"From the 16th to the 24th hour, the charges remain the same and the hourly rate will be reapplied after every 24 hours," said Malaysia Airports Holdings Berhad senior general manager (operation services) Datuk Azmi Murad.

He said the parking rates were inclusive of the 5% service tax as required by the government.

Azmi refuted claims that the cost of parking at the LCCT was high as compared to other airports.

"Travellers must understand that they have the option of parking very close to the airport. Our parking rates are also cheaper compared with many other international airports where the facilities are much lower in standard," added Azmi.

He said there were not many airports that had their parking lots close to the main building and therefore it was unfair to make comparisons even if there were those which provided covered parking lots.

Azmi said MAHB frequently carried out comparison studies on parking charges at other international airports and had found that the charges at the LCCT were among the lowest.

(Visited 139 times, 1 visits today)
This website is designed and maintained to search, gather, analyze, organize, categorize, and publish the widely available information related to LCCT, available both online and offline, for the sharing and benefit of visitors who will be using the Malaysia's LCCT (Low Cost Carrier Terminal) facilities to visit Malaysia. Read more about us. FYI: www.lcct.com.my is not affiliated, associated, not in any business relationship with Malaysia Airports Holdings Berhad (MAHB), the company in charge of operating the Malaysia's LCCT (Low-cost Carrier Terminal). Also, this website is NOT subsidized, funded, sponsored, endorsed, officially approved by MAHB or any airlines, food, telco, transport and many other companies mentioned. The privacy of our visitors to www.lcct.com.my is important to us. Please review our privacy policy.