In its modernisation drive, KTMB has constantly upgraded itself to be a more convenient, timely and comfortable mode of public transport.

KTM Berhad has its origins in Malaysia's pre-independence era but it has come a long way since then as one of the country's most well-known institutions.

In its modernisation drive, KTM Berhad or known as KTMB in short, has constantly upgraded itself to be a more convenient, timely and comfortable mode of transport for its customers.

KTMB President Dr Aminuddin Adnan said the railway company was proud to have even more tricks up its sleeve as part of its transformation and modernisation drive to attract more passengers to enjoy train rides in Malaysia. 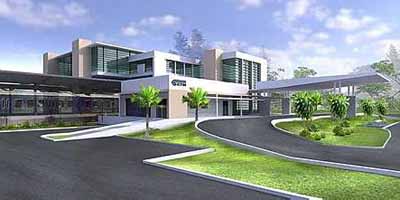 Future plans: An artist's impression of the future Ipoh-Padang Besar station along the Ipoh-Seremban route.

Buying KTMB tickets will be made easier with several key ticketing services already in place, he said.

He said the e-Ticket system allows passengers travelling on board the KTM Intercity to buy their tickets online via KTMB's website.

By logging on to KTMB's website, www.ktmb.com.my, passengers can buy their tickets from any location without having to go the ticket counter.

"Ticket purchase via online is proven to be more convenient, safe and may be carried out anywhere, anytime and may be made using either VISA or MasterCard.

"This hassle-free transaction is in line with the development of our online technology and with the new cashless era.

KTM is also part of the e-KL project developed by MAMPU, where passengers can send SMS messages to 15888 to check on KTM Intercity timetable, fare and station location.

Apart from that, KTM Intercity passengers can also book their tickets via their mobile phone through KTMB's SMS service.

"This is a hassle-free ticket reservation system. Passengers do not have to call our stations or Call Centre. They can just send SMS, follow the instructions and collect their tickets later at a more convenient time," he said.

At the moment, Dr Aminuddin said, SMS booking can be used to book economy class to the East Coast and Northern region and Second Class to the Southern Region.

He said passengers only need to send the SMS to 32425. Each transaction will be charged RM0.50.

"The receipt printed upon purchase is considered a valid ticket and may be used for travel.

"This is another convenience brought by KTMB for passengers, especially those who are located quite far from the railway station and do not have access to the internet," he said, adding that a full list of participating Petronas Mesra Stations and OnePay Kiosks can be found at KTMB's website.

Dr Aminuddin said KTMB has a new toy in its ranks in the form of five new sets of electric trains that promises to provide a faster and more comfortable ride. 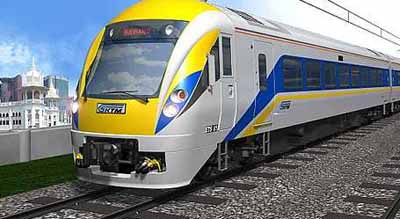 All aboard!: KTMB's new Electric Train Set is capable of speeds up to 140kmh.

"With a speed of 140km/h, the new trains are expected to offer a smoother and speedier ride on new tracks.

"Passengers would be able to reach Seremban from Ipoh and vice-versa in about three hours.

"Other features including brand new coaches that are complete with unisex toilets, disabled-friendly washrooms, a cafeteria and power sockets for those working on the go".

"With the completion of this track, we are enabling Ipoh residents to commute to Kuala Lumpur on a daily basis, a few times day.

"In fact, in the future, it is possible for Ipoh residents to stay in Ipoh and work in Kuala Lumpur or even down to Seremban, catching the morning and late evening train to go and come back from work," he said.

He said the first set of trains is expected to be delivered by December 2009 and KTMB plans to start the service by March 2010.

"This is an important route as it will connect passengers to a wide variety of interconnected prime networks.

"This new service will provide seamless connectivity between KTM Berhad and Kuala Lumpur's other important terminals such as the LCCT (via Nilai Station) and KLIA (via Bandar Tasik Selatan and KL Sentral stations)," he said.

Meanwhile, he said the Ipoh-Padang Besar and Seremban-Gemas electrified double tracking projects are well underway and are expected to be completed by 2013.

"These routes consist of a number of stations with well-equipped facilities, such as facilities for the disabled, lifts, ample parking, prayer rooms, spacious lobby, covered platform, user friendly station area, and many other amenities," he said.

"New train stations will be built along the new route. These stations are Batu Kentonmen, Kampung Batu, Taman Wahyu and Batu Caves.

"These stations and the new route will definitely draw more passengers, especially foreign tourists and Hindu devotees to the Hindu temple, as the Batu Caves Station is located right next to the temple itself," he said, adding it was expected to be completed in April 2010.

Dr Aminuddin said KTM Berhad is upgrading stations to include covered platforms at various KTM Komuter stations in the Klang Valley to protect passengers from the elements.

"Previously, most platforms were uncovered so passengers were affected during rainy or hot sunny days," he said, adding that the entire refurbishment project was due to be completed in December 2013.

"Park & Pay passengers at KTM Komuter stations will not be left out as the parking facilities will also be expanded to include, among others, multi-storey carparks.

"As the ridership is increasing and we are expecting more passengers, KTM Komuter is making more space for vehicle parking, with covered walkways from the parking to the station for a more convenient transit," he said.

He said KTM Berhad is also in the midst of upgrading facilities for the disabled at various KTM Komuter stations in the Klang Valley.

"A total of 12 stations have and will be upgraded to OKU-friendly stations. At present, seven stations have been successfully upgraded, which include, among others, Subang Jaya, Bank Negara, Kepong Sentral, MidValley, Kajang and Seremban. This project is expected to be completed by May 2010.

"Various Klang Valley stations would also be installed with Wi-Fi services to enable people on the go to surf and work while waiting for the train to arrive. This project is expected to be completed by October 2012", he said.

With all the recent developments in the modernisation of KTM system and facilities, passengers can expect a more reliable, convenient, comfortable and hassle-free travel in the near future on the KTM Berhad rail network.

(Visited 356 times, 1 visits today)
This website is designed and maintained to search, gather, analyze, organize, categorize, and publish the widely available information related to LCCT, available both online and offline, for the sharing and benefit of visitors who will be using the Malaysia's LCCT (Low Cost Carrier Terminal) facilities to visit Malaysia. Read more about us. FYI: www.lcct.com.my is not affiliated, associated, not in any business relationship with Malaysia Airports Holdings Berhad (MAHB), the company in charge of operating the Malaysia's LCCT (Low-cost Carrier Terminal). Also, this website is NOT subsidized, funded, sponsored, endorsed, officially approved by MAHB or any airlines, food, telco, transport and many other companies mentioned. The privacy of our visitors to www.lcct.com.my is important to us. Please review our privacy policy.