AirAsia is offering all-in fares starting from as low as RM8 for domestic flights and from RM25 for international flights in conjunction with its eighth year anniversary celebrations and achievements.

To enjoy the promotions, customers must book seats online from Dec 8 to Dec 18 and fly between July 5 and Oct 30 next year. 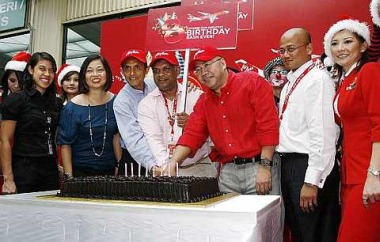 Airline CEO Datuk Tony Fernandes also announced that AirAsia would be introducing Sydney and Seoul as its new routes in mid-2010 through the AirAsia X package, followed by 12 new routes in India.

On another matter, Fernandes said the airline’s website airasia.com had attracted 20 million unique visitors per month with its blogsite blog.airasia.com, ranking it as the world’s second most popular blog site by an airline.

“Tapping into the new media and social networking sites has given an advantage to AirAsia to keep its customers informed of the latest promotions and other updates.”

Announcing the recent success at its eighth year anniversary celebration here yesterday, he said: “AirAsia has attracted a large following using the Internet including those from places we don’t fly to yet, like the United States.”

AirAsia’s facebook at facebook.airasia.com has a fan base of some 100,000 since it was launched nine months ago.

(Visited 39 times, 1 visits today)
This website is designed and maintained to search, gather, analyze, organize, categorize, and publish the widely available information related to LCCT, available both online and offline, for the sharing and benefit of visitors who will be using the Malaysia's LCCT (Low Cost Carrier Terminal) facilities to visit Malaysia. Read more about us. FYI: www.lcct.com.my is not affiliated, associated, not in any business relationship with Malaysia Airports Holdings Berhad (MAHB), the company in charge of operating the Malaysia's LCCT (Low-cost Carrier Terminal). Also, this website is NOT subsidized, funded, sponsored, endorsed, officially approved by MAHB or any airlines, food, telco, transport and many other companies mentioned. The privacy of our visitors to www.lcct.com.my is important to us. Please review our privacy policy.