THE SkyPark Subang Terminal is set to be Malaysia's premier airport in the city and reposition itself firmly on the world aviation map.

Members of the media were recently taken on a tour of the airport by Subang SkyPark Sdn Bhd executive director Tan Sri Ravindran Menon.

With only 10% work yet to be completed, the RM40mil terminal is fully operational and now accommodates an average of 60 flights a day, comprising local and regional arrivals and departures. 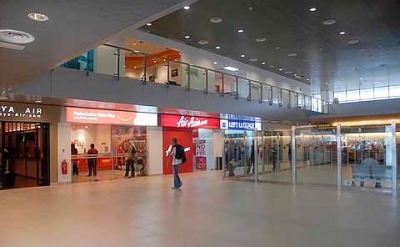 Practical and convenient: The layout of the terminal is designed to meet the requirements of air travellers.

The airport is home to Berjaya Air and Firefly, and both Malaysia Airlines and Air Asia also operate ticketing offices there.

The city airport has 13 check-in counters, separate departure and arrival halls for international and domestic travellers, and three immigration counters for both inbound and outbound flights.

The 13,935 sq metre SkyPark Subang Terminal is expected to handle 2.5 million passengers by the end of this year.

The SkyPark Subang Terminal is part of an extensive overall RM400mil exercise to transform the existing facilities in Subang into a regional hub for aviation that comprises a city airport for turbo-prop airlines, a fixed base operations (FBO), and maintenance, repair and overhaul facilities (MRO).

The terminal's dedicated private aviation terminal is also already fully operational, and, with a runway capable of accommodating a 747 jetliner, it will serve as the country's gateway for inbound and outbound corporate and private jets. Dubbed the SkyPark FBO Malaysia, it has also planned 12.14ha of land for hangarage facilities to house privately- owned aircraft.

"We would like to envision SkyPark Subang Terminal as the grand central station for domestic and regional aviation. With the refurbishment that has been undertaken, the availability of flights to and from the more popular destinations, connectivity, by virtue of its strategic location, proximity to the city, accessibility, and the cost savings it extends travellers, we believe this airport will return Subang on the world aviation map in an even bigger way," Ravindran said.

"We anticipate the airport becoming the preferred embarkation and disembarkation point for frequent and urban air travellers," he added. 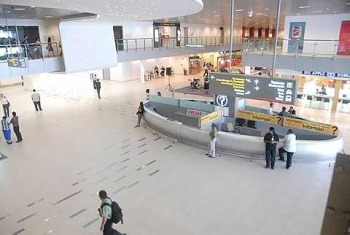 No cramping: The terminal is spacious with wide walkways, and emphasises the comfort of airport visitors and travellers.

Four dedicated lanes serve as an entry point into SkyPark Subang Terminal to avoid congestion: The first, which is nearest to the terminal entrance, is for passenger drop-off and pick-up; the second is for taxis and valet parking; the third, for coach and delivery vehicles; and the fourth, for special access to the corporate aviation facility.

There is also valet parking service – a first for Malaysian airports – while just across the road is a 750-bay open-air parking area that is accessible via an overhead pedestrian bridge leading directly into the terminal.

There are two parking bays for the physically-challenged in the driveway, as well as an elevator in the city airport to reach the upper level.

The internal design is practical and convenient for air travellers.

As soon as passengers step into the departure section, they will find the ticketing offices of the four airlines, the check-in counters and the two banks (Maybank and CIMB) all strategically positioned.

On the mezzanine floor above is the corporate office of Vistajet Holdings SA that operates its luxury Bombardier fleet comprising the Learjet 60, Challenger 604, a Challenger 605 and a Challenger 850 in catering to both domestic and regional private aviation needs.

The terminal is spacious with wide walkways, and emphasises the comfort of airport visitors and travellers.

And, in a first for an airport in Malaysia that is touted as a "lifestyle destination", a jazz band performs six evenings a week at the lobby of the arrival hall next to the F&B outlets.

The airport also two courier service companies, a mini-emporium D'Trend Avenue, a money changer, three reflexology and fish spas (at the main lobby and domestic and international departure halls), and a luggage deposit counter where those who wish to travel light can safely deposit their belongings under lock and key.

Other outlets include two magazine stores, a souvenir shop, a handphone service provider and a duty-free store at the international arrival/departure hall.

Originally known as the Sultan Abdul Aziz Shah Airport Subang Terminal 3, and built in 1993 to cater to Malaysia Airlines' domestic flights, the airport was subsequently used by private aviation companies when commercial airline operations shifted to the KL International Airport (KLIA) and the Low Cost Carrier Terminal (LCCT) in Sepang.

(Visited 227 times, 1 visits today)
This website is designed and maintained to search, gather, analyze, organize, categorize, and publish the widely available information related to LCCT, available both online and offline, for the sharing and benefit of visitors who will be using the Malaysia's LCCT (Low Cost Carrier Terminal) facilities to visit Malaysia. Read more about us. FYI: www.lcct.com.my is not affiliated, associated, not in any business relationship with Malaysia Airports Holdings Berhad (MAHB), the company in charge of operating the Malaysia's LCCT (Low-cost Carrier Terminal). Also, this website is NOT subsidized, funded, sponsored, endorsed, officially approved by MAHB or any airlines, food, telco, transport and many other companies mentioned. The privacy of our visitors to www.lcct.com.my is important to us. Please review our privacy policy.