THE public can expect road diversions beginning from Feb 3 as upgrading work at KL Sentral begins.

The road is now being used by the Low Cost Carrier Terminal (LCCT) buses, the RapidKL buses and the coupon taxis.

"The inner road, which caters to the buses, will remain open, while the outer road used by the taxis will be closed," said Malaysian Resources Corporation Berhad (MRCB) project director Nooraini Mohamad Rashidi.

"We are shifting five bays for the trunk route of RapidKL buses to Jalan Tun Sambanthan to allow taxis to use the inner road as well," he added.

Pedestrians using the walkway connecting the Monorail station and KL Sentral have also been asked to use the new covered walkway that goes around Lot G. 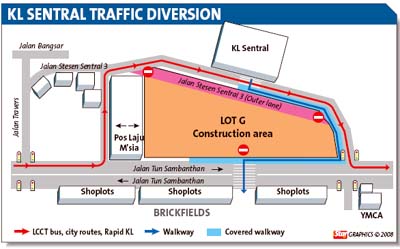 She said they would be putting special tiles and railings for the blind to access the new pathway with ease as well.

"We have briefed the Brickfields community as well and they seem receptive to the idea. We are concerned about the blind people who make up the majority of the community," she added. 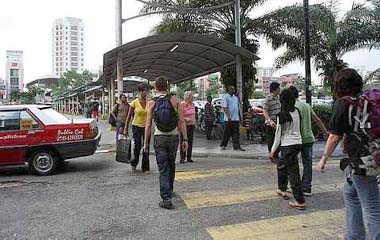 Old: The pedestrian walkway that cuts across Lot G will be closed for construction work.

She said in order to help the commuters adapt to the changes, extra information counters and police beat bases would be opened for enquiries and complaints.

Nooraini said MRCB is also looking into the possibility of making Jalan Tun Sambathan a one-way road and would submit the plans to the Kuala Lumpur City Hall to be reviewed.

Brickfields RT chairman S.K.K Naidu, however, believes that more can be done to improve the congestion in Jalan Tun Sambathan.

"The road is already busy at present. In fact, we are the ones who moved the buses inside and now its being brought out again. This is going to worsen traffi congestion," he said.

He said MRCB, the Kuala Lumpur City Hall and the Brickfields community should have an open discussion and draw out a new plan.

Naidu, however, said the changes should have been done after making Jalan Tun Sambathan a one-way street.

The construction work for Lot G, which is now being used as a carpark and pedestrian walkway, is expected to be completed in 2015.

The building plans include a retail mall, office towers and a new hotel to cater to the increasing number of commuters.

A covered pathway for monorail users will be extended all the way into the new building that will also be connected to KL Sentral.

"This covered pathway will be air-conditioned and will serve the 65,000 people who are expected to use the station by 2030," she added.

The car park will also include four basements with more than 3,200 parking bays.

(Visited 161 times, 1 visits today)
This website is designed and maintained to search, gather, analyze, organize, categorize, and publish the widely available information related to LCCT, available both online and offline, for the sharing and benefit of visitors who will be using the Malaysia's LCCT (Low Cost Carrier Terminal) facilities to visit Malaysia. Read more about us. FYI: www.lcct.com.my is not affiliated, associated, not in any business relationship with Malaysia Airports Holdings Berhad (MAHB), the company in charge of operating the Malaysia's LCCT (Low-cost Carrier Terminal). Also, this website is NOT subsidized, funded, sponsored, endorsed, officially approved by MAHB or any airlines, food, telco, transport and many other companies mentioned. The privacy of our visitors to www.lcct.com.my is important to us. Please review our privacy policy.