Skip to content
On 9 May 2014, LCCT officially closes, a new Kuala Lumpur International Airport 2 (KLIA2) is built to replace the LCCT with bigger & better facilities. As a result, the info posted on this website is no longer applicable to the new KLIA2. Visit www.klia2.info for latest info on the new klia2 terminal.
Tuesday April 13, 2010, by The Star

KUALA LUMPUR: North and south-bound travellers now have to take their buses at Bukit Jalil following the four-month closure of the Puduraya bus terminal. 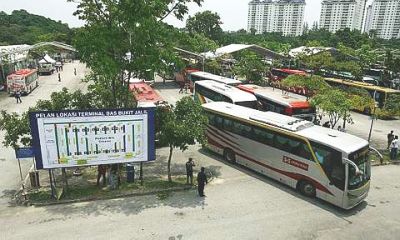 The closure, which took effect yesterday, is to facilitate upgrading and renovation works at the Puduraya terminal.

However, many were unaware of the change and turned up at the terminal.

Although notices were put up to indicate shuttle buses were being provided by RapidKL at a fee of RM2, from Puduraya to Bukit Jalil and vice-versa, passengers said the signs were not visible enough and they only realised the terminal was closed upon seeing all the shutters down.

Traders operating in the terminal were also unhappy that they were given less than a week’s notice to move to the new site.

Some demolition works started yesterday as hawker stalls in the food court were taken down.

Taxi services to Genting Highlands, however, are still operating from the terminal.

The Bukit Jalil Complex Parking Lot F, which serves as the new temporary site, only serves passengers headed north and south while east-bound travellers still have to board the bus at Hentian Putra.

It was reported that from April 12th, 2010, all bus services to the north and the south operating from the Puduraya Terminal will move to this temporary bus terminal (Car Park F). It is the same depot as the one previously used for the Raya / CNY balik kampung exodus. For more info on Puduraya’s 4-month closure, call the hotlines at 03 2078 7017 and 03 2078 6018. 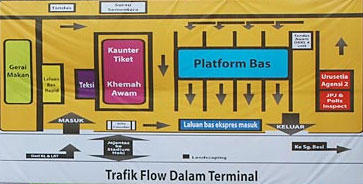 This temporary station functions as an extension of the faraway Hentian Puduraya during the annual Hari Raya / Chinese New Year balik kampung mass exodus. It acts as a terminal for express buses traveling to and from the southern states (of Negeri Sembilan, Melaka and Johor). Ironically, the place looks and feels much better than the aging, purpose-built, tout-infested Puduraya.

For the festive season, Hentian Puduraya and Hentian Duta will serve buses plying the northern states (of Perak, Penang, Kedah and Perlis) while Hentian Putra and Pekeliling will handle the buses from East Coast States (of Pahang, Terengganu and Kelantan). The Pasar Rakyat Bus Terminal will continue to ferry passengers to and from Singapore and Genting Highlands.

The official period for using the terminal as a balik kampung transit point during this year’s (2009) Hari Raya exodus is from the 12th to 27th September. Things appear to be better organised now with seats under a giant canopy acting as a shelter and waiting area. During this period, RapidKL also operates a 24-hour shutter bus service from/to the various terminals for RM 2. There are plenty of taxis waiting along the road outside but they cherry pick their destinations as usual. Instead of opening and slamming cab doors repeatedly, just take the bus or train.

Couple of things to note if you are traveling by (Star) LRT from Puduraya’s Plaza Rakyat LRT Station. Head for the Bukit Jalil Station and make sure you are on the right train (track) or you might end up in Ampang instead. The Bukit Jalil LRT station is not exactly in front of the makeshift bus terminal. It might be tough if you have heavy luggage or are traveling with elderly folks and little children. There is an overhead pedestrian bridge in front of the terminal though many passengers cross without using it as traffic is usually at a standstill due to the festive rush.

KUALA LUMPUR: The temporary bus terminal in Bukit Jalil, which started operating at the National Sports Complex car park, here, three weeks ago has managed to cater to the public’s needs.

However, bus users have stated their wish for an information counter to help first timers using services at the terminal.

Besides that, it is also seen as necessary to take action on ticket touts who cause congestion at the terminal which is much smaller compared to the Puduraya bus terminal.

According to a 47-year-old woman from Sabah, who declined to be named, as a new user she found it difficult to obtain information as there was no information counter.

“Earlier I had asked some people for information, but they did not reply. This is why I think an information counter is necessary to help us figure out which platform to go to, and it will also help tourists,” she told Bernama.

For MAHSA University College student, Kavitha Balakrishnan, 19, the numerous buses on standby at each platform caused confusion as people did not know which bus to get on.

“Puduraya is much better because we know which bus we should board and is less complicated,” she said.

Another student, 19-year-old Nashadira Zulkifli from Universiti Teknologi Mara (UiTM), said ticket touts were also a nuisance at the temporary bus terminal because of its small area.

“The terminal is small and these ticket touts would constantly approach people and make the place hot and congested,” she said.

Besides that, bus users have also urged the terminal operator to do something about the open waiting area which poses discomfort to passengers, especially during rainy days.

The temporary bus terminal set up to replace the Puduraya terminal, which is being upgraded and improved, offers other facilities such as a surau, toilets, waiting area, food stalls and baggage storage services.

RapidKL buses, taxis, and Light Rail Transit (LRT) services are also readily available with buses available for the journey from Bukit Jalil to Puduraya and vice versa at a 15 minute frequency.

How to go to Bukit Jalil?

If you are using public transport, just go behind Plaza Rakyat Station (Star Line), then take the train straight to Bukit Jalil.

(Visited 1,005 times, 1 visits today)
This website is designed and maintained to search, gather, analyze, organize, categorize, and publish the widely available information related to LCCT, available both online and offline, for the sharing and benefit of visitors who will be using the Malaysia's LCCT (Low Cost Carrier Terminal) facilities to visit Malaysia. Read more about us. FYI: www.lcct.com.my is not affiliated, associated, not in any business relationship with Malaysia Airports Holdings Berhad (MAHB), the company in charge of operating the Malaysia's LCCT (Low-cost Carrier Terminal). Also, this website is NOT subsidized, funded, sponsored, endorsed, officially approved by MAHB or any airlines, food, telco, transport and many other companies mentioned. The privacy of our visitors to www.lcct.com.my is important to us. Please review our privacy policy.