AirAsia Bhd plans to defer taking delivery of eight Airbus A320 aircraft for 2010 and may opt to do the same for another eight aircraft the following year, said its group chief executive officer Datuk Seri Tony Fernandes.

"We are negotiating with Airbus SAS to push the orders to the back end. Our focus next year is to consolidate our aircraft type to all A320s and return the 13 B737 that we have leased from GE Commercial Aviation Services (GECAS)," he told StarBiz in an interview.

Datuk Seri Tony Fernandes …'we are negotiating with Airbus SAS to push the orders to the back end.'

As at end-June, the budget airline had 61 aircraft of which 48 are for its Malaysian operations, and the rest for Thai AirAsia and Indonesia AirAsia.

With the deferment, AirAsia is expected to push most of it new aircraft to its associates in Indonesia and Thailand, leaving very few new aircraft for its Malaysian operations, thus limiting its growth potential going forward although the two units will be able to expand more aggressively.

"Referring the delivery of these aircraft is an opportunity lost to AirAsia as it would mean forgoing an attractive 12-year aircraft financing package which is close to LIBOR (rates) negotiated just prior to the economic crisis. (But issues arising from) the uncertainty of the new LCCT to be completed by July 2011 far outweighs the opportunity lost in this attractive financing (package)," said Datuk Kamarudin Meranun, the deputy CEO of AirAsia.

Fernandes denied that the plan to defer aircraft deliveries had to do with raising funds for the purchase of the aircraft, saying "the funding for this and next year is in order."

In February this year, AirAsia mandated Barclays Capital, the investment banking division of Barclays PLC, to finance 15 of its new Airbus A320.

"We are in negotiations with the supplier for all aircraft to have minimal or zero cash outlay and that will not put a strain on our cash.

"We are not delaying the deliveries because of cashflow, we need the planes for our operations but there is an infrastructure risk out there that we cannot afford to take," Fernandes said. 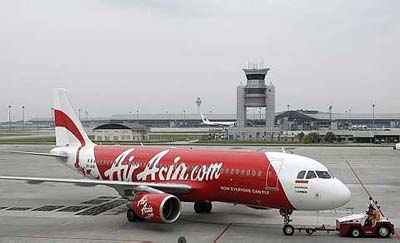 An AirAsia aircraft is being pulled at Kuala Lumpur International Airport's low-cost carrier terminal in Sepang. With the deferment, AirAsia is expected to push most of its new aircraft to its associated in Indonesia and Thailand. – AP

All airlines had been hurt by the economic crisis, Fernandes pointed out, but "our cashflow is very healthy. In fact, we are working towards having RM1bil cashflow by the first quarter of 2011."

AirAsia had RM224mil cash and RM6.93bil debts in its books at the end of March 31, most of it for aircraft financing.

But for this year, Fernandes said "there will be no delays in taking the aircraft deliveries."

AirAsia has taken delivery of five of 14 aircraft scheduled for this year.

AirAsia has been expanding routes and frequencies when many airlines globally are cutting back, with the budget carrier aiming to expand to places like India, Middle East and North America.

"Expansion is necessary but we will never stretch ourselves. Imagine this, if we were to slow down we could have been crushed by our competitors from Singapore. We believe in growing but in a sensible manner," Fernandes said.

AirAsia was only one of a handful of airlines to post a profit in the first quarter.

AirAsia's earnings in its March quarter rose 26% to RM203.2mil from a year earlier due to higher passenger numbers from additional routes.

(Visited 51 times, 1 visits today)
This website is designed and maintained to search, gather, analyze, organize, categorize, and publish the widely available information related to LCCT, available both online and offline, for the sharing and benefit of visitors who will be using the Malaysia's LCCT (Low Cost Carrier Terminal) facilities to visit Malaysia. Read more about us. FYI: www.lcct.com.my is not affiliated, associated, not in any business relationship with Malaysia Airports Holdings Berhad (MAHB), the company in charge of operating the Malaysia's LCCT (Low-cost Carrier Terminal). Also, this website is NOT subsidized, funded, sponsored, endorsed, officially approved by MAHB or any airlines, food, telco, transport and many other companies mentioned. The privacy of our visitors to www.lcct.com.my is important to us. Please review our privacy policy.