THE McDonald LCCT-KLIA outlet was voted the F&B outlet of the year for the second time in a row while Pan Pacific KLIA won the Chairman's Award at the KLIA Awards 2008 ceremony held at the Pan Pacific KLIA hotel in Sepang recently.

A total of 15 awards were up for grabs for all airline and service providers operating at the KL International Airport.

The ceremony was the fourth edition of the awards, for which the winners are given recognition based on passenger movements, strong growth, good sales performance, international recognition as well as service performance. The recent awards were all based on 2008 performance.

The awards come in the shape of a specially constructed 1.5 kg pewter trophy, which takes after the KLIA columns supporting the terminal building, resembling an oil palm.

The KLIA Awards was introduced in 2006 and is the only award in the country that pays tribute to the best performers in the aviation industry. 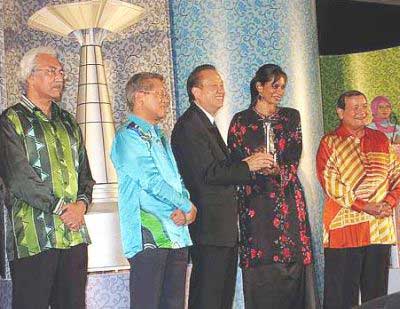 Deputy Transport Minister Datuk Robert Lau, who gave away the awards, said the secret of KLIA's success lay in the synergy of the dedicated people who worked hand in hand to make what the airport what it is today.

"I truly appreciate the commitment and support of every one who has contributed to KLIA's success throughout the year," Lau said.

Malaysia Airports managing director Tan Sri Bashir Ahmad said the KLIA Awards was a medium to acknowledge those within the KLIA community who had consistently improved themselves and enhanced their presence at the airport with their excellent service extended to all airport users.

"This year, 2009, has been a trying time for the aviation industry but the existing cooperation among all airport operators and partners will ensure KLIA ends the year on a positive note," Bashir said.

More than 500 guests attended the event, at which the multi-talented Leonard Tan provided entertainment.

(Visited 39 times, 1 visits today)
This website is designed and maintained to search, gather, analyze, organize, categorize, and publish the widely available information related to LCCT, available both online and offline, for the sharing and benefit of visitors who will be using the Malaysia's LCCT (Low Cost Carrier Terminal) facilities to visit Malaysia. Read more about us. FYI: www.lcct.com.my is not affiliated, associated, not in any business relationship with Malaysia Airports Holdings Berhad (MAHB), the company in charge of operating the Malaysia's LCCT (Low-cost Carrier Terminal). Also, this website is NOT subsidized, funded, sponsored, endorsed, officially approved by MAHB or any airlines, food, telco, transport and many other companies mentioned. The privacy of our visitors to www.lcct.com.my is important to us. Please review our privacy policy.