AirAsia Bhd group chief executive officer Datuk Seri Tony Fernandes feels the airline and sister carrier AirAsiaX should not pay for parking and landing charges at the new permanent low cost carrier terminal (LCCT) that will be ready by 2011.

"We should not be charged for the landing and parking of our airplanes as we are bringing in the volume of passengers for the airport operator," he told StarBiz in an interview.

He said airport operator Malaysia Airports Holdings Bhd (MAHB) should be able to earn enough income from letting its shoptlots at the new terminal to cover its costs.

"MAHB can keep the rental income from the shoplots but waive our charges," he said.

He said by 2014, AirAsia would be able to grow its passenger volume to 26 million. 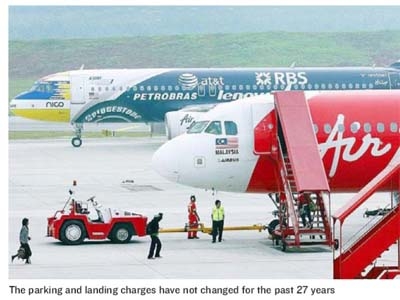 "We need to get the right cost structure to enable us to provide low fares as our business model is about low fares and free seats," Fernandes said.

"Our business has a multiplier effect and in times of an economic crisis, which Malaysian brand has gone so far? MAHB should be fair to enterpreneurs."

He also wants the international passenger service charge (PSC) or airport tax at the new LCCT reduced from the current RM25 per passenger to RM10. His rationale for that is not to burden passengers in the current economic downturn.

With planning for the new facility under way, Fernandes was quick to point out that he did not want any aerobridges to keep costs down.

He did not disclose AirAsia and AirAsia X's landing and parking charges at the existing LCCT.

The Government recently decided that the new permanent LCCT will be built near the KL International Airport (KLIA) main terminal in line with the National Airport Masterplan and to allow optimisation of resources such as runways, control towers and transportation infrastructure. MAHB will operate the new terminal, for which construction is expected to begin this year.

The new permanent LCCT will cater for 30-35 million passengers annually.

Giving incentives in the airline industry is not new. MAHB has been doing that to encourage airlines to fly into KLIA.

When AirAsia moved from Subang to LCCT, it was given a five-year incentive programme to facilitate its move.

During this period, AirAsia enjoyed a waiver on aeronautical charges for all its flights, which included landing, parking, aerobridge and check-in counter charges. It also got special rental rates for office space at all airports. This programme expired in 2007.

MAHB could not accede to AirAsia's request for an extension as MAHB wanted to be fair to all airlines and not continue to single out one airline for the incentives.

The parking and landing charges have not changed for the past 27 years and MAHB is formulating a new incentive scheme, which will include waivers and discounts as incentives for growth. It is learnt that the new scheme will be very helpful to airlines including AirAsia.

The Government decides on PSC and approves any proposal on landing and parking charges. MAHB declined to comment on AirAsia's request.

(Visited 65 times, 1 visits today)
This website is designed and maintained to search, gather, analyze, organize, categorize, and publish the widely available information related to LCCT, available both online and offline, for the sharing and benefit of visitors who will be using the Malaysia's LCCT (Low Cost Carrier Terminal) facilities to visit Malaysia. Read more about us. FYI: www.lcct.com.my is not affiliated, associated, not in any business relationship with Malaysia Airports Holdings Berhad (MAHB), the company in charge of operating the Malaysia's LCCT (Low-cost Carrier Terminal). Also, this website is NOT subsidized, funded, sponsored, endorsed, officially approved by MAHB or any airlines, food, telco, transport and many other companies mentioned. The privacy of our visitors to www.lcct.com.my is important to us. Please review our privacy policy.