EVEN before the new permanent low-cost carrier terminal (LCCT) can be constructed, AirAsia and AirAsiaX are already asking not to pay landing and parking charges. That may show the two are fast in their forward planning but should the request be even considered?

There is a cost to building the LCCT even though the government may be forking out the investment. There is also a cost to maintaining the facilities and providing services to airlines. Who should pay for them?

Naturally, airlines and passengers. These are the two groups of the many groups that use an airport. Landing fee is a charge paid by an airline for using the runway. Parking fee is for using the tarmac and taxiway.

In boom times airlines expand and that means more income for an airport operator. But the weak global economy has been hammering airlines and forcing them to make cutbacks.

Route cutting hurts airports financially because they lose the landing fees, parking payments and other revenue associated with the lost flight. 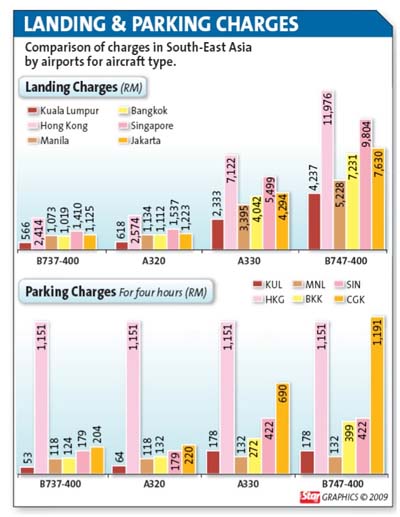 AirAsia's view is that airport operator Malaysia Airports Holdings Bhd (MAHB) should be able to make enough money from shoplot rental income and passenger service charge to pay for facilities maintenance and the carrier should be allowed to fly for free in and out of the new LCCT@KLIA.

That demand may be far-fetched as no airport in the world practises free landing and parking for commercial flights as airports incur maintenance fees. More so, aeronautical charges have been on a decline.

If that model of free landing and parking works, then Singapore's Changi Airport should be the first to waive its fees for it has more shoplots than KLIA. Malaysia's parking and landing charges have not changed in the past 27 years. It is one of the lowest if not lowest in the region.

Even Changi cannot beat that pricing. Also, MAHB has time and again offered incentives for airlines to spur growth at the airports it manages in the country.

AirAsia has been a beneficiary of the incentives and got a five-year waiver when it moved from Subang to LCCT@KLIA. The discounts were staggering.

MAHB is now working on a new incentive programme which would really make airlines sigh in relief in the current trying times.

Hopefully the new incentives will meet AirAsia's needs midway. Just imagine this – if AirAsia manages to get a waiver, rival Malaysia Airlines is not going to take it lying down.

MAS will be screaming for the same perks and so will the 46-odd airlines that fly into KLIA. If that happens, MAHB might as well turn into a charitable organisation instead of a listed company that is answerable to its shareholders.

As a business entity that offers services, MAHB has to be fair to all its clients and it will not make economic sense to give one party free rights and make others pay for the same rights.

But AirAsia's rationale for the request can also be understood. Had it got the rights to build its own airport at Labu, it would not have to pay for landing and parking.

But a decision has been made for a new permanent LCCT to be built near the main terminal building at KLIA and MAHB will operate it.

That new airport needs to be maintained and those using the services have to pay. It is a simple model of pay per use.

Perhaps AirAsia should consider asking for a discount rather than an outright waiver. Its chances for the former may be better.

B.K. SIDHU is deputy news editor at The Star. She believes that discounts are good so long it is for the real and good stuff and not fakes.

(Visited 1,037 times, 1 visits today)
This website is designed and maintained to search, gather, analyze, organize, categorize, and publish the widely available information related to LCCT, available both online and offline, for the sharing and benefit of visitors who will be using the Malaysia's LCCT (Low Cost Carrier Terminal) facilities to visit Malaysia. Read more about us. FYI: www.lcct.com.my is not affiliated, associated, not in any business relationship with Malaysia Airports Holdings Berhad (MAHB), the company in charge of operating the Malaysia's LCCT (Low-cost Carrier Terminal). Also, this website is NOT subsidized, funded, sponsored, endorsed, officially approved by MAHB or any airlines, food, telco, transport and many other companies mentioned. The privacy of our visitors to www.lcct.com.my is important to us. Please review our privacy policy.