AirAsia Bhd's long-haul airline, AirAsia X, finally took off to London from the Low Cost Carrier Terminal (LCCT) yesterday with 289 passengers on board, 1 and half years after the plan was first announced.

The maiden flight on an Airbus A340-300 was scheduled to land at Stansted Airport, Britain's third busiest airport. 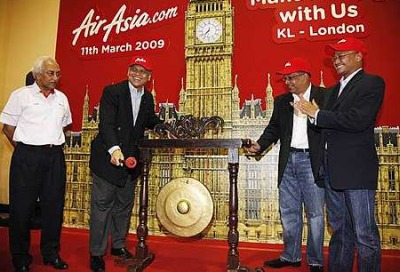 Azran said the 50% rebate for landing charges would present an opportunity to lower cost and lower fares to passengers.

"As cost becomes lower, we will be passing through in terms of lower fares to our passengers. When we offer low fares, more people will fly.

"We are not afraid of competition because when we have the low-cost structure, it is the best place to offer low fares," he told reporters.

Azran also said AirAsia X was looking at expanding further in Asia-Pacific, and to more destinations in China and Australia.

He said it was also interested in India and the Middle East. London is AirAsia X's fifth international destination after Gold Coast, Perth and Melbourne in Australia and Hangzhou in China. AirAsia X will be launching a new route from Kuala Lumpur to Tianjin, China, next month.

(Visited 69 times, 1 visits today)
This website is designed and maintained to search, gather, analyze, organize, categorize, and publish the widely available information related to LCCT, available both online and offline, for the sharing and benefit of visitors who will be using the Malaysia's LCCT (Low Cost Carrier Terminal) facilities to visit Malaysia. Read more about us. FYI: www.lcct.com.my is not affiliated, associated, not in any business relationship with Malaysia Airports Holdings Berhad (MAHB), the company in charge of operating the Malaysia's LCCT (Low-cost Carrier Terminal). Also, this website is NOT subsidized, funded, sponsored, endorsed, officially approved by MAHB or any airlines, food, telco, transport and many other companies mentioned. The privacy of our visitors to www.lcct.com.my is important to us. Please review our privacy policy.