Malaysians are assured that Prime Minister Datuk Seri Najib Tun Razak's first budget, set against the backdrop of budget deficits worldwide, is by no means "boring".

This is despite the views held by many analysts that they do not expect any major positive surprise measures as the budget has been largely pre-empted by the various stimulus packages.

With stronger signs of economic recovery, Najib's team is boldly setting an ambitious target to cut operating expenditure to the point that the Government's original aim of balancing the budget (prior to the financial crisis) may be achieved by as early as next year.

Fiscal discipline will be a major issue as the Government is cognisant of investors' concerns over its high fiscal deficit estimated at 7.6% of gross domestic product (GDP) this year compared with 4.8% last year. 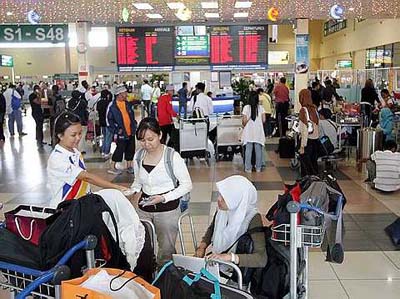 The Sepang LCCT will be considered for development funding

According to Reuters, the 2010 target for the budget deficit will be set at 5.5% of GDP.

However, the Government's bold move to trim inflated and unproductive operating expenses, as exposed in the recent auditor-general's report, is unlikely to have a significant impact on growth, which will likely be revised slightly upwards from the current forecast of -4% to -5%,say economists.

The Asian Development Bank had revised its forecast for Malaysian economic growth this year to -3.1% from an original -0.2%. "The expenditure ceiling under the Ninth Malaysia Plan (2006-2010) is RM230bil and a total of RM174.2bil, or 75.8% of total allocation, has been utilised.

"This means that a balance of RM55.8bil will be allocated for the 2010 budget, a rise of 1.3% from an estimated RM55bil in 2009 (assuming a 3% spending shortfall from the budget allocation of RM56.7bil)," CIMB Investment Bank economic research head Lee Heng Guie said in a recent report.

However, given the constraint in the implementation capacity, the shortfall might be higher, he said.

Among the jobs to be considered for development funding are the Bakun undersea cable project, Sepang LCCT works and the Klang Valley light rail transit extension. There are 12 outstanding RM80bil mega projects which are not mostly part of the stimulus packages.

Anchored on the concept of "1Malaysia: Together We Prosper", his budget measures will address the needs of the rakyat from almost all walks of life with selective spending, especially in education, rural infrastructure, community and agriculture development, public utilities, healthcare as well as telecommunications (possibly including the acceleration of the roll-out of the high-speed broadband infrastructure).

The six key result areas to receive attention will likely involve the combating of crime and corruption, ensuring greater access to quality and affordable education, upgrading the quality of life for the poor, improving rural infrastructure and public transportation.

To encourage competition, there may be further liberalisation of protective barriers and gradual phasing out of tax incentives that are irrelevant.

To spur innovation, CIMB suggests an overhaul of the corporate tax code to include:

A new knowledge tax credit that allows companies to take a 30%-40% credit on incremental increases in expenditure on research and experimentation, global standards setting, branding and workforce training; and

To encourage the adoption of technology that is environmentally friendly, it is suggested that the Government grant tax deductibility for R&D on developing new growth engines, devise incentives for installers of "green energy" or "renewable energy" technologies, give tax incentives for new energy-efficient homes, reduce import duty on hybrid cars and introduce a potential subsidy for mandatory biodiesel programmes.

Among the suggested measures to aid the recovery in the property sector include a reduction in the holding cost of property developers by allowing the early release of unsold bumiputra units after six months from a project launch, the bumiputra discount to be only applicable for houses priced up to RM250,000 to ensure equitable distribution, and reduction in the withholding tax on dividends received so as to boost the real estate investment trust market.

(Visited 25 times, 1 visits today)
This website is designed and maintained to search, gather, analyze, organize, categorize, and publish the widely available information related to LCCT, available both online and offline, for the sharing and benefit of visitors who will be using the Malaysia's LCCT (Low Cost Carrier Terminal) facilities to visit Malaysia. Read more about us. FYI: www.lcct.com.my is not affiliated, associated, not in any business relationship with Malaysia Airports Holdings Berhad (MAHB), the company in charge of operating the Malaysia's LCCT (Low-cost Carrier Terminal). Also, this website is NOT subsidized, funded, sponsored, endorsed, officially approved by MAHB or any airlines, food, telco, transport and many other companies mentioned. The privacy of our visitors to www.lcct.com.my is important to us. Please review our privacy policy.