Malaysia Airports Holdings Bhd (MAHB) has raised its full-year forecast for passenger traffic at all the airports it operates in the country to a positive growth of between 3% and 4% this year compared with 2008, said managing director Tan Sri Bashir Ahmad.

It had earlier projected flat growth this year from the 47.45 million travellers it recorded in 2008.

Bashir said there had been a pick-up in the number of arrivals in recent months, and he expected the trend to continue for the rest of the year. 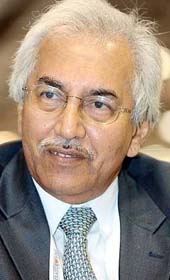 The improved outlook was on the back of 4.4% increase in tourist arrivals recorded during the first eight months of the year, official figures from the Tourism Ministry showed.

Bashir also said Air Astana, Kazakhstan’s flag carrier, would start its service from KL International Airport (KLIA) on Oct 31, while two other airlines may come in by the end of the year.

Meanwhile, MAHB is sticking to its target to open the new low-cost carrier terminal (LCCT) by September 2011.

The call for tenders to build the new LCCT – which may cost as much as RM2bil – was launched on Monday and will close on Nov 9, according to notices published in local newspapers on Monday.

It was previously reported that the new LCCT would have an initial capacity to handle 30 million passengers per year, and could be expanded to cater for up to 45 million travellers.

To boost the appeal of airports under its management, MAHB had recently obtained safety management system (SMS) certifications for five international airports in Malaysia.

The five airports were the first in Asia to receive the certification.

Bashir said next in the company’s pipeline was to have five domestic airports, in Bintulu, Tawau, Miri, Sibu and Terengganu, certified in 2010.

(Visited 128 times, 1 visits today)
This website is designed and maintained to search, gather, analyze, organize, categorize, and publish the widely available information related to LCCT, available both online and offline, for the sharing and benefit of visitors who will be using the Malaysia's LCCT (Low Cost Carrier Terminal) facilities to visit Malaysia. Read more about us. FYI: www.lcct.com.my is not affiliated, associated, not in any business relationship with Malaysia Airports Holdings Berhad (MAHB), the company in charge of operating the Malaysia's LCCT (Low-cost Carrier Terminal). Also, this website is NOT subsidized, funded, sponsored, endorsed, officially approved by MAHB or any airlines, food, telco, transport and many other companies mentioned. The privacy of our visitors to www.lcct.com.my is important to us. Please review our privacy policy.