MALAYSIA Airports Hold-ings Berhad (MAHB) has completed the expansion work on the low-cost carrier terminal (LCCT) at the KL Inter-national Airport (KLIA) in Sepang, which included new international departure and arrival halls, a public concourse, government offices, a curbside and a parking area.

However, by 2011 the current LCCT will be converted into a cargo-handling terminal once the new terminal is completed.

Construction of the new RM2bil LCCT is expected to start by the middle of this year and scheduled for completion by the third quarter of 2011.

According to MAHB chairman Tan Sri Aris Othman, it will not be a problem to convert the current LCCT into a cargo terminal without incurring much expenditure as the structure is designed for easy conversion.

Aris said this during the opening ceremony of the Marrybrown fast-food outlet at the LCCT-KLIA.

He said the new LCCT, to be built near the KLIA would be able to handle up to 30 million passengers a year from the current 15 million.

"We will have the potential to increase the passenger volume to 45 million a year as we have studied all angles for future expansion," Aris said. 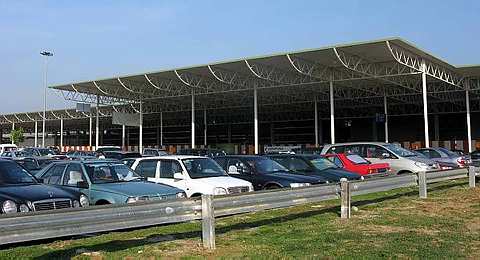 Bigger and better: More parking bays are available at the expanded LCCT.

The new terminal was proposed to be sited near the KLIA after a joint-venture plan by the low-cost carrier AirAsia Bhd and Sime Darby Bhd to build a new LCCT costing RM1.6bil at Labu in Negri Sembilan was vetoed by the federal government.

Aris said MAHB had discussed with the airlines on a structural design which could cater to both low-cost and full service carriers.

He said although a new LCCT was being planned, MAHB would not compromise on passenger comfort at the present LCCT and would continue to improve the services.

Aris said MAHB was confident that the passenger traffic, especially international flights, would continue to rise despite the current economic situation as low-cost carrier operators continued to introduce new destinations and increase flight frequencies to increase the number of passengers.

"This will further increase the need to encourage more retail and food and beverage activities at this terminal, so there is a need to multiply dining options," he said.

(Visited 79 times, 1 visits today)
This website is designed and maintained to search, gather, analyze, organize, categorize, and publish the widely available information related to LCCT, available both online and offline, for the sharing and benefit of visitors who will be using the Malaysia's LCCT (Low Cost Carrier Terminal) facilities to visit Malaysia. Read more about us. FYI: www.lcct.com.my is not affiliated, associated, not in any business relationship with Malaysia Airports Holdings Berhad (MAHB), the company in charge of operating the Malaysia's LCCT (Low-cost Carrier Terminal). Also, this website is NOT subsidized, funded, sponsored, endorsed, officially approved by MAHB or any airlines, food, telco, transport and many other companies mentioned. The privacy of our visitors to www.lcct.com.my is important to us. Please review our privacy policy.