Taxi fares from the Low-Cost Carrier Terminal (LCCT) in Sepang to Kuala Lumpur will be raised soon.

The current fares are lower than fares from KL International Airport to the capital, although the terminal is further by 13km.
Minister in Prime Minister's Department Datuk Seri Nazri Abd Aziz said the Commercial Vehicle Licensing Board (CVLB) would be reviewing the rates soon.

A budget taxi from the terminal to Kuala Lumpur costs RM61, but is RM67 from KLIA.

Nazri said the new fares would be based on distance.

"The licensing board will work on it to introduce a fair price," said Nazri. 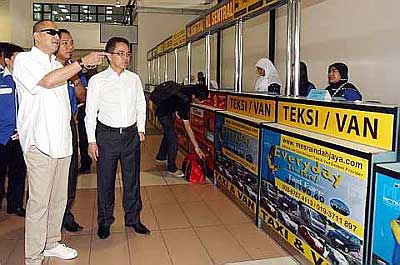 Airport walkabout : Nazri Abd Aziz (left) and Liew touring the LCCT where they had a dialogue with bus and taxi drivers yesterday. Accompanying them was Mesra Indah Jaya general manager Norhisam Bajuri.

Board director Naimah Ramli said the taxi fares from the terminal were lower because it was a budget terminal.

Nazri also announced that taxi permits for the terminal had been frozen until the demand for taxis there increased.

Currrently, there are 1,512 taxi drivers at the terminal.

"Taxi drivers complain they can hardly make three trips a day and this is insufficient for them to pay their instalments," he said.

An action committee led by Nazri, comprising representatives from the CVLB, the Road Transport Department, police, taxi operators and taxi drivers association had been formed to meet every three months, he said.

(Visited 135 times, 1 visits today)
This website is designed and maintained to search, gather, analyze, organize, categorize, and publish the widely available information related to LCCT, available both online and offline, for the sharing and benefit of visitors who will be using the Malaysia's LCCT (Low Cost Carrier Terminal) facilities to visit Malaysia. Read more about us. FYI: www.lcct.com.my is not affiliated, associated, not in any business relationship with Malaysia Airports Holdings Berhad (MAHB), the company in charge of operating the Malaysia's LCCT (Low-cost Carrier Terminal). Also, this website is NOT subsidized, funded, sponsored, endorsed, officially approved by MAHB or any airlines, food, telco, transport and many other companies mentioned. The privacy of our visitors to www.lcct.com.my is important to us. Please review our privacy policy.