SOME passengers arriving at the Low-Cost Carrier Terminal (LCCT) are unhappy with the way touts operate at the terminal.

While the touts provide a much-needed service, they definitely tarnish the country's image among tourists.

During a recent three-hour stake-out at the LCCT bus terminal, the StarMetro team saw some youths with walkie-talkies communicating with the bus counter clerks at the arrival hall, asking them to direct passengers to the waiting buses.

And since the touts provide a convenient and efficient service, commuters do not mind paying a little extra to enable them to leave the place faster.

However, regular travellers are not happy with the way the touts operate at the LCCT terminal.

A regular traveller said the "touting" actually starts at the bus counters located in the arrival hall where counter clerks tell passengers about the buses "scheduled to move immediately" and those in a hurry take up the offer. 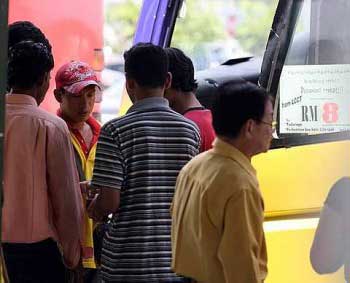 For faster service: Passengers buying tickets to board a bus at the LCCT.

"However, this is not so. The bus only leaves when full," said C.K. Lim, who had arrived on an afternoon flight from Solo, Indonesia.

Lim said travellers prefer to buy their tickets from touts at the bus terminal as they could then hop into the first bus leaving the place.

"I was told on two separate occasions that the bus would leave at a certain time. It did not depart at the said time and I had to wait in the bus for 20 minutes. I would have been on my way if I had bought my ticket outside," added Lim.

It was noticed that although many flights had landed that afternoon, most of the travellers pushed their baggage past the ticket counters to buy tickets from the touts at the bus terminal located about 100m away.

The situation at the LCCT is unlike that at the KL Sentral bus terminal where commuters have complained of being harrassed by touts all the time.

Commuters as well as travellers who had just arrived at the LCCT did not seem to mind paying extra to get to their destinations as there were many bus services to choose from and most had similar departure times.

The touts know which bus was leaving the terminal and would direct the travellers to the waiting bus.

However, travellers who bought their tickets online, as in the case of the Skybus with the AirAsia logo which includes the RM8 fare to KL Sentral, would have no choice.

LCCT-KLIA manager Raghbir Singh said if it was found that the counter clerks at the arrival hall were indeed "touting" and giving wrong information to arriving passengers, action would be taken against them.

However, he added that Malaysia Airports was unable to take action against the "touts'operating at the bus terminal as the bus services come under the jurisdiction of the Commercial Vehicle Licensing Board (CVLB).

Raghbir said Malaysia Airports was aware of touts operating at the bus terminal and therefore it was for the bus operators to solve the problem as it would mar the image of the LCCT.

"We have had meetings with the bus operators and CVLB to bring all the bus companies under a common umbrella body but there seems to be differing ideas," said Raghbir.

He said both Aerobus and Skybus have their own operating schedules but it would be wise if they could work out common rules and regulations as well as departure times to overcome the problems of touts.

(Visited 24 times, 1 visits today)
This website is designed and maintained to search, gather, analyze, organize, categorize, and publish the widely available information related to LCCT, available both online and offline, for the sharing and benefit of visitors who will be using the Malaysia's LCCT (Low Cost Carrier Terminal) facilities to visit Malaysia. Read more about us. FYI: www.lcct.com.my is not affiliated, associated, not in any business relationship with Malaysia Airports Holdings Berhad (MAHB), the company in charge of operating the Malaysia's LCCT (Low-cost Carrier Terminal). Also, this website is NOT subsidized, funded, sponsored, endorsed, officially approved by MAHB or any airlines, food, telco, transport and many other companies mentioned. The privacy of our visitors to www.lcct.com.my is important to us. Please review our privacy policy.