After you have completed your high-speed KLIA Transit train ride to the Salak Tinggi station, the air-conditioned shuttle fleet awaits to send you directly to LCCT.

Effective from 15 Sept 2009, passengers using the KLIA Transit train to the Salak Tinggi station will be ferried directly to the LCCT on a dedicated air-conditioned shuttle coach. 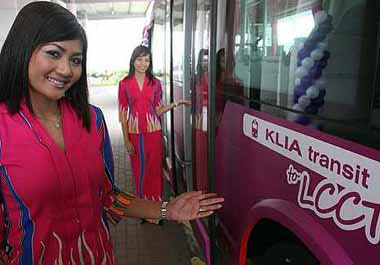 A porter will also be on hand to help with luggage at the Salak Tinggi station at no extra charge.

Salak Tinggi is the capital of Sepang district in the state of Selangor, Malaysia. It has a suburb called Kota Warisan to the west, which is home to the Salak Tinggi Station where the KLIA Transit Express Rail Link (ERL) from KLIA to KL Sentral stops every half-hourly. Salak Tinggi is also known as the Airport City.

A visit there will see city folks charmed by such a small town with two bridges welcoming visitors at the township’s entrance.

One landmark is the Empress Hotel, which is the tallest building in the area, and located in the town centre.

In the town centre, visitors will also notice a small bus/taxi terminal as well as the Medan Selera Majlis Daerah Sepang near Taman Anggerik.

Two mosques can be found in the area with the Masjid Sultan Hisamuddin catering to Bandar Baru Salak Tinggi residents and the Masjid KLIA catering to those living near the airport or the circuit.

The township does not offer much but it is a popular stop over for those on their way to Nilai using the trunk road, especially if they’re looking for some food.

Salak Tinggi is inundated annually by motorsports fans when it hosts the Formula-1 Malaysian Grand Prix at the Sepang International Circuit (SIC). 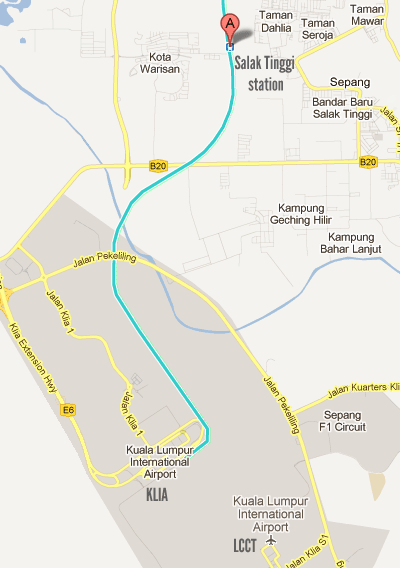 The Airport City Business Centre is becoming increasingly popular due its proximity to the KLIA and LCCT airports (15 minutes drive away) and is beside the Salak Tinggi ERL Station where there is a twice-hourly KLIA Transit service to KLIA and KL Sentral (Central transportation hub in Kuala Lumpur city).

Latest version of this article Salak Tinggi station is available at www.klia2.info
(Visited 2,257 times, 1 visits today)
This website is designed and maintained to search, gather, analyze, organize, categorize, and publish the widely available information related to LCCT, available both online and offline, for the sharing and benefit of visitors who will be using the Malaysia's LCCT (Low Cost Carrier Terminal) facilities to visit Malaysia. Read more about us. FYI: www.lcct.com.my is not affiliated, associated, not in any business relationship with Malaysia Airports Holdings Berhad (MAHB), the company in charge of operating the Malaysia's LCCT (Low-cost Carrier Terminal). Also, this website is NOT subsidized, funded, sponsored, endorsed, officially approved by MAHB or any airlines, food, telco, transport and many other companies mentioned. The privacy of our visitors to www.lcct.com.my is important to us. Please review our privacy policy.