SkyBus, which provides shuttles to the Low-Cost Carrier Terminal (LCCT), will offer a special direct service to the Sepang International Circuit (SIC) from various points in the Klang Valley.

The service, which will be offered from April 3 to 5, will start at 8am while the return from Sepang will begin from 4pm except on race day when the return trip will start from 6pm. 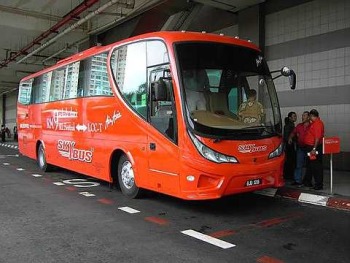 Official bus: SkyBus will drop passengers at seven points around the SIC.

Fees have been priced between RM4 and RM15 depending on the pick-up points.

"We hope the special SkyBus service will make it more convenient for fans to attend the race and thus increase the attendance for the race weekend," SkyBus managing director and CEO Chris S. Thiagarajah said after the signing ceremony with SIC at the circuit recently.

Thiagarajah said Skybus' appointment was timely as it coincided with the company's third anniversary.

"This is the first time that SIC has appointed an official bus to pick up passengers from several pick-up points in the Klang Valley.

"As the official bus, we will be doing the internal shuttle route as well and will drop passengers at seven points around the circuit," he said.

He said the bus service would be available every half hour from the pick-up points.

"The last bus heading to SIC will be at 2pm on Friday and Saturday and 4pm on Sunday.

"While the last bus heading out of SIC to the various destinations will be at 7pm on Friday, 1am on Saturday and 2am on Sunday," Thiagarajah said.

Meanwhile, for a faster option to the track, ERL, which provides the quickest option to the KL International Airport, has come up with easy packages for fans.

For the three race days (April 3-5), the public will be able to buy day passes to the track.

For all three days, a pass for one will be priced at RM130, which applies for a trip to and back from the circuit.

The passes will include transfer service from KLIA to the SIC and pass buyers will also get one complimentary ticket for the KL Monorail service.

"Besides making it a more successful event, ERL is also hoping that we will be able to cut down on the traffic jam which usually occurs throughout the weekend," said ERL deputy vice-president Asset Services Management Ramesh Balakrishnan.

Meanwhile, SIC CEO Razlan Razali said: "SIC is glad to be working with SkyBus and ERL to provide easier, cheaper and possibly faster options to the track.

"With the exciting support races in store and the concert of the race which features superstar Jamiroquai, easy access to the circuit would be vital to ensure this year's Petronas Malaysia Grand Prix will an event which is irresistible to all," added Razlan.

(Visited 78 times, 1 visits today)
This website is designed and maintained to search, gather, analyze, organize, categorize, and publish the widely available information related to LCCT, available both online and offline, for the sharing and benefit of visitors who will be using the Malaysia's LCCT (Low Cost Carrier Terminal) facilities to visit Malaysia. Read more about us. FYI: www.lcct.com.my is not affiliated, associated, not in any business relationship with Malaysia Airports Holdings Berhad (MAHB), the company in charge of operating the Malaysia's LCCT (Low-cost Carrier Terminal). Also, this website is NOT subsidized, funded, sponsored, endorsed, officially approved by MAHB or any airlines, food, telco, transport and many other companies mentioned. The privacy of our visitors to www.lcct.com.my is important to us. Please review our privacy policy.