A new 4km runway will also be built with the LCCT, which is expected to be operational in the third quarter of 2011.

"It will be designed to handle up to 45 million passengers a year and be connected to the main terminal via an extended Express Rail Link (ERL) and a new side road," Bashir said at a press conference yesterday.

"With the new LCCT, KLIA would be able to handle up to 90 million passengers a year."

The present LCCT would then be reverted into a cargo handling terminal.

The new LCCT, spread over 150,000 sq metres, would be larger than the main terminal with retail and food outlets to ensure passenger comfort.

There are plans for a 6,000-vehicle parking complex, parking bays for 70 planes and an integrated transport hub for buses and taxis.

"We are also taking the views of various airlines into account," Bashir said, adding that AirAsia had requested at least 95,000 sq metres for the new LCCT.

Bashir said 10,000 sq metres of the space would go towards setting up AirAsia's headquarters, which would be sited away from airport operation areas.

He said landing and aircraft parking fees and airport tax would most likely remain unchanged. 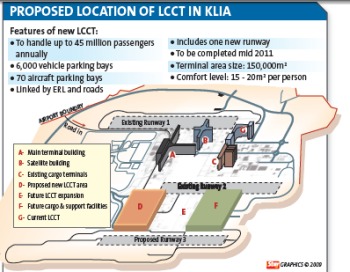 "The Government decides on all aeronautical charges and airport tax, not us," he said, adding that MAHB would fund the project through loans.

"We have received letters of offers from several sources," he said, adding that tenders would be called in the next few months.

Bashir added that KLIA's master plan took into account long-term use of infrastructure and land to handle up to 120 million passengers annually. Currently, only 30% of the entire complex and land are used.

A joint proposal to build a new low cost carrier terminal in KLIA East@Labu, Negri Sembilan, by Sime Darby and AirAsia was rejected.

Bashir said the plan to build the new LCCT near the main terminal was part of the National Airport Master Plan for Malaysia to strategically develop all 24 airports in the country over 50 years.

"This is to ensure KLIA will grow into a significant regional hub."

(Visited 81 times, 1 visits today)
This website is designed and maintained to search, gather, analyze, organize, categorize, and publish the widely available information related to LCCT, available both online and offline, for the sharing and benefit of visitors who will be using the Malaysia's LCCT (Low Cost Carrier Terminal) facilities to visit Malaysia. Read more about us. FYI: www.lcct.com.my is not affiliated, associated, not in any business relationship with Malaysia Airports Holdings Berhad (MAHB), the company in charge of operating the Malaysia's LCCT (Low-cost Carrier Terminal). Also, this website is NOT subsidized, funded, sponsored, endorsed, officially approved by MAHB or any airlines, food, telco, transport and many other companies mentioned. The privacy of our visitors to www.lcct.com.my is important to us. Please review our privacy policy.