MAHB expects RM2bil project to be completed in 2011

Construction of the new RM2bil low-cost carrier terminal (LCCT) is expected to commence by mid-year for completion in the third quarter of 2011, says builder and operator Malaysia Airports Holdings Bhd (MAHB).

MAHB managing director Datuk Seri Bashir Ahmad says the project will be funded by the company via loans.

"We have no debts so it is no problem to raise funds," he said at a media briefing in Subang yesterday.

To this end, Bashir says the company already has the offer letters.

Contracts to build the new terminal will be tendered out over the next few months, he adds. 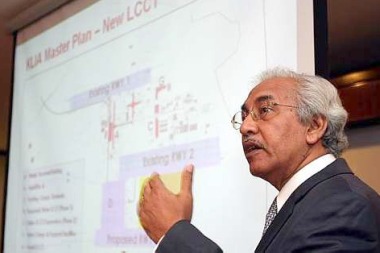 Bashir says the current LCCT will be converted into a cargo terminal.

As for possible lower charges at the new LCCT, Bashir says: "All aeronautical charges will be decided by the Government.

"Our charges are not related to the cost of the new terminal. They (charges) do not go up automatically when we build new terminals."

To a question on why the cost is higher than the originally proposed RM1.6bil by AirAsia and Sime Darby, Bashir says this is because the terminal will be "bigger" and with more facilities.

"The design of the terminal, to be located 1.5km away from the main KLIA terminal, will have to be worked out but the construction of the new runway can start immediately.

"We are talking to the airlines and finalising the design," he says, adding that the terminal can be used by both low-cost and full service carriers.

To a question, Bashir says MAHB is in discussions with Express Rail Link Sdn Bhd to extend its current connection to the new LCCT.

On the 50% rebate in landing charges as announced in the mini budget earlier this week, Bashir says it will not affect the company's bottomline. "We are working with the Government on a revenue-sharing basis for the landing charges," he says.

Responding to another question, Bashir says MAHB had in August 2007 appointed the joint-venture company of Netherlands Airport Consultants BV and KLIA Consultancy Services for the preparation of a National Airport Masterplan for the country, which included the development of a LCCT.

"It took us 16 months to study this (LCCT plan). We did it professionally," he adds.

Separately, he says he anticipates "0% growth" this year for its airports, owing to the economic slowdown which will affect passenger movement. "We do expect to remain profitable."

Other than KLIA and other domestic and international airports in Malaysia, MAHB also owns stakes in several foreign airports, including India's Delhi International Airport. It also has other businesses, such as retail.

(Visited 49 times, 1 visits today)
This website is designed and maintained to search, gather, analyze, organize, categorize, and publish the widely available information related to LCCT, available both online and offline, for the sharing and benefit of visitors who will be using the Malaysia's LCCT (Low Cost Carrier Terminal) facilities to visit Malaysia. Read more about us. FYI: www.lcct.com.my is not affiliated, associated, not in any business relationship with Malaysia Airports Holdings Berhad (MAHB), the company in charge of operating the Malaysia's LCCT (Low-cost Carrier Terminal). Also, this website is NOT subsidized, funded, sponsored, endorsed, officially approved by MAHB or any airlines, food, telco, transport and many other companies mentioned. The privacy of our visitors to www.lcct.com.my is important to us. Please review our privacy policy.