FANS of Old Town White Coffee and coffee lovers alike can now look forward to enjoying a hot cuppa on board AirAsia flights and at a soon-to-be-opened outlet at the Low Cost Carrier Terminal (LCCT).

"From March onwards, the Old Town White Coffee will be served on board all local AirAsia flights.

"From next month onwards, they will be served on board all flights that depart from AirAsia's regional hubs in Malaysia, Thailand and Indonesia," he said.

The Old Town 3-in-1 Classic White Coffee will be sold at RM5 per cup. There are plans to include the Milk Tea and Hazelnut flavours soon.

Chuah said the company had allocated RM100,000 to advertise its latest milestone in the local print media, and would also be advertising in Travel 3Sixty, AirAsia's inflight magazine. 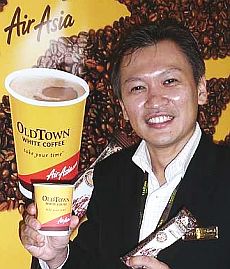 The advertisements feature the tagline Now Everyone Can Fly and Drink Old Town White Coffee.

"The response has been encouraging thus far, and we're selling about 300 cups of Old Town White Coffee per day," said Chuah.

"Our target would be to sell 1,000 cups per day once the coffee is available on the flights that depart from the three regional hubs."

On the company's other milestone, he said Old Town White Coffee would be opening an F&B outlet at the entrance of the departure hall in the LCCT's new wing.

"It will be open for business in the middle of this month and will mark our 121st outlet. This outlet will be open 24 hours a day, seven days a week.

"The outlet, which is a joint venture project, will feature most of the items available at most of our F&B outlets, with some adjustments on the food items as we will be introducing three or four additions," he said.

He said the company had invested RM600,000 for the outlet located at the LCCT, and planned to open 40 more throughout Malaysia.

"Selling our coffee on board AirAsia's flights offers a good channel to promote our coffee and cover the entire South-East Asia market," he said, adding that they are also looking at exploring new markets in the Middle East and Australia.

(Visited 152 times, 1 visits today)
This website is designed and maintained to search, gather, analyze, organize, categorize, and publish the widely available information related to LCCT, available both online and offline, for the sharing and benefit of visitors who will be using the Malaysia's LCCT (Low Cost Carrier Terminal) facilities to visit Malaysia. Read more about us. FYI: www.lcct.com.my is not affiliated, associated, not in any business relationship with Malaysia Airports Holdings Berhad (MAHB), the company in charge of operating the Malaysia's LCCT (Low-cost Carrier Terminal). Also, this website is NOT subsidized, funded, sponsored, endorsed, officially approved by MAHB or any airlines, food, telco, transport and many other companies mentioned. The privacy of our visitors to www.lcct.com.my is important to us. Please review our privacy policy.